25 Signs American Women Are Being Destroyed By The Sexual Revolution And Our Promiscuous Culture – Lady Gaga Photo by T J SengelHas the sexual revolution been good for American women?  Not at all.  In fact, when you look at the facts it becomes clear that the sexual revolution has been an absolute disaster for American women.  In the United States today, men have been trained to primarily view women as sex objects, and our culture has become exceedingly promiscuous.  As a result, the United States leads the world in teen pregnancy, there are 19 million new STD infections every single year, more than half of all children born to women under the age of 30 are being born out of wedlock and we are witnessing the systematic breakdown of the family unit in America.  And yet anyone that tries to teach our young women that they should dress modestly and keep themselves pure for marriage is severely criticized.  Well, if all Americans actually did keep themselves pure until marriage, we wouldn’t have nearly the problems with STDs, teen pregnancy and abortion that we do today.  The consequences of teaching our young women that they should be “free” to run around and sleep with a whole bunch of different men have been dramatic.  The following are 25 signs that American women are being destroyed by the sexual revolution and our promiscuous culture…

#1 There are 19 million new STD infections in the United States every single year.  Approximately half of them happen to young people in the 15 to 24-year-old age bracket.

#3 There were more than 1.4 million cases of chlamydia reported in the United States in 2011.  An astounding 33 percent of those cases involved Americans that were younger than 20 years of age.

#4 It is estimated that about one out of every six Americans between the ages of 14 and 49 have genital herpes.

#5 24,000 American women become infertile each year due to undiagnosed STDs.

#6 In the United States today, approximately 47 percent of all high school students have had sex.

#7 Sadly, one out of every four teen girls in the U.S. has at least one sexually transmitted disease.

#8 According to one survey, 24 percent of all U.S. teens that have STDs say that they still have unprotected sex.

#9 Amazingly, one out of every five teen girls in the U.S. actually wants to be a teenage mother.

#11 When men don’t have to wait until they get married to have sex, then they are likely to delay marriage or never get married at all.  According to the Pew Research Center, only 51 percent of all Americans that are at least 18 years old are currently married.  Back in 1960, 72 percent of all U.S. adults were married.

#13 In the United States today, more than half of all couples “move in together” before they get married.

#14 The divorce rate for couples that live together first is significantly higher than for those that do not.

#15 America has the highest divorce rate on the globe by a wide margin.

#16 For women under the age of 30 living in the United States today, more than half of all babies are being born out of wedlock.

#17 At this point, more than one out of every four children in the United States is being raised by a single parent.

#18 Approximately 42 percent of all single mothers in the United States are on food stamps.

#19 The sexual revolution has caused women to be primarily looked at as sex objects.  In this kind of environment, it should be no surprise that there has been an absolute explosion of pornography in recent years.  An astounding 30 percent of all Internet traffic now goes to pornography websites, and the U.S. produces more pornography than any other nation has in the history of the world.

#20 One survey discovered that 25 percent of all employees that have Internet access in America visit sex websites while they are at work.

#21 Overall, more than 50 million babies have been killed in America since Roe v. Wade was decided in 1973.

#22 When you total up all forms of abortion, including those caused by the abortion drug RU 486, the grand total comes to more than a million abortions performed in the United States every single year.

#23 The number of American babies killed by abortion each year is roughly equal to the number of U.S. military deaths that have occurred in all of the wars that the United States has ever been involved in combined.

#24 It has been reported that a staggering 41 percent of all New York City pregnancies end in abortion.

#25 One study found that 86 percent of all abortions are done for the sake of convenience.

So what can be done about any of this?

Unfortunately, turning our culture around would not be an easy thing.  Loose sexuality is glorified on television, in the movies, on our radios and in our magazines.  Just about everywhere you turn there are very powerful sexual images.  The following is an excerpt from a recent article by Devvy Kidd…

As long as our culture pushes these values, we will continue to suffer the kinds of consequences listed above.

So what do all of you think about these things?

Do you believe that there is any hope for America?

Everyone Loves A Police State 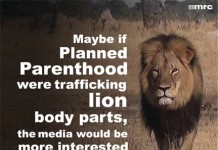