On July 12th through the 16th Tracye and I were in Branson Mo speaking at the Prophecy in the News Prophecy Summit 2012. It was a very enjoyable event and a great time of fellowship. We wanted to share some of the highlights with you as well as some of the pictures.

This is the morning of the conference. Got up and checked emails. Not much going on so we headed down stairs after getting dressed and started setting up. 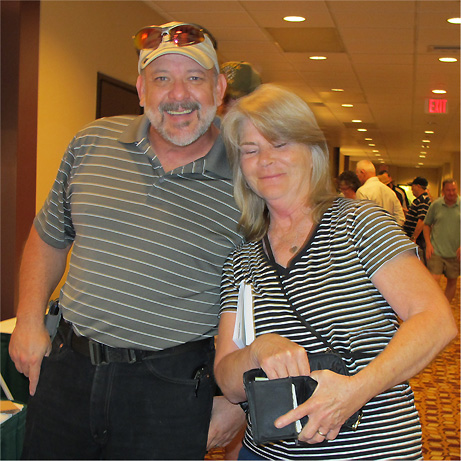 Tracye and I got down to our table and PZ Member Hatty came over and said “HI”. She wanted to get a book and take some pictures. No her eyes are not closed, she is looking down in her purse, she was getting my book at the same time.

Yep…guns and cute dogs. I kept telling folks that the AR-15 is to draw in the guys and the Yorkies were to draw in the gals. FYI… yea it works too. This is what our table looked like once we got it set up.

Things started to pick up and I try to always autograph the book when someone purchases it. As you can see the dogs were being “watch dogs” over the table.

It was a real blessing to see PZ Member Johnson at the conference. He is a former teacher who could not teach what he was being asked to teach. Some of the stories he told us was incredible. People, if you can help it, don’t send your kids to public school.

Doc Marquis author of the well known book Secrets of the Illuminati. His table was right across from ours, interesting information as well as incredible past / life Doc came from.

Gordon McDonald from K-House. Gordon and I go way back to the old days when bible prophecy was getting its start on the web. If you have been to a conference where Chuck Missler is speaking, odds are you met Gordon. 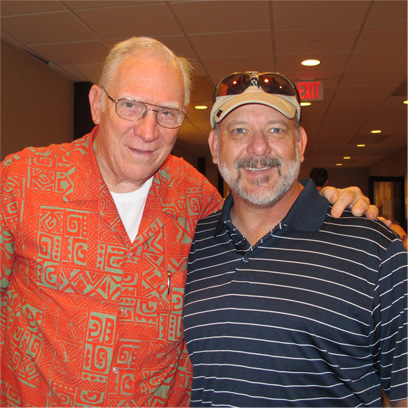 Me and Chuck Missler. They were one table down from ours. We got to yack it up with Chuck when things were slow and other speakers were speaking. Rumor mill is correct, K-House does have offices set up in New Zealand and it is an established base of operations. In fact after the conference I heard that Chuck was flying back down again.

The person we spent the most time with was Avi Lipkin. In fact his hotel room was right next to ours. Avi observes the sabbath, so he and his son shut down their table around 8:10PM to ensure they were not working on the sabbath. Around 9:00ish Tracye and I walked up to our room and we heard Avi and his son singing the sabbath songs, lighting the candles and giving the prayer. We stood there outside their room and listened to their singing and such. It was weird, we were both blessed hearing that.

Avi wanted a better picture and one where he wasn’t being so silly. In the other, Avi was telling us a joke at the time. If you ever get a chance to go hear Avi speak, do it. Out of all the speakers, Avi had the most to say in my opinion. He is out there issuing a warning to our nation. He is totally against the direction our Muslim president is taking us and in fact stated that this administration has “cut a deal” with the Saudi King to allow hundreds of thousands of Muslims into our country in exchange for low oil prices around the time of the elections. The rumored price for a gallon of gas was $2.55. To be honest if it drops below $2.85 it would raise the red flags with me with what Avi told us. I am going to try to get Avi on PZ Radio in the near future.

Noah W. Hutchings &  Larry Spargimino AKA South West Radio Church was next to our table again this year and that gave Tracye time to talk to Noah about things going on in the world.

We had the chance to sit with some interesting gentlemen, Steve and Craig. Steve is a farmer and was telling me his major concerns about the food supply. See Steve owns several thousand acres and grows beans and corn. He also informed me that due to the serious lack of rain as well as the intense heat that this nation has been having, his crops this year are destroyed. It isn’t only him, he stated that farmers from all over the nation are seeing the same thing happen to them.

Steve and I talked at leangth about putting up food supplies. He told me that he is literally scared to death about the lack of food this nation has, or better yet does not have. He told me that we have till around fall time frame and food prices are going to start jumping and jumping up high. He is seriously concerned that store shelves will be literally empty.

For those of you who have listened to PZ Radio, I have had Lorri Harden on several times. Lorri is not only a PZ Insider, but also the scientist that works for the Dept of Agricultrure for the state of Oklahoma. She has been saying the same thing on our show.

What is interesting is to hear it from one who is the producer. Steve was telling me that a major famine was on the cusp for this nation because of so many crops failing.

Craig, who is a rancher was also telling me that his cattle ranch is in sad shape as well. No rain thus no water for the cattle. Pasture land is already dead and the ground turning to dust. He was already breaking into his winter feed and did not know how he was going to make it through the winter since he is feeding his cattle all that he had.

Craig’s only option was to sell early and hope that he can recoop his losses. That means also selling females as well. So getting his herd to bounce back was going to take some time.

Steve said that all he can do is chop up what he has left of his crops and hopefully sell them for feed.

We easily had about 15-20 couples come up to us and ask us about putting together a christian community down there.

The one thing that we noticed more with this conference over the last one is that more people were concerned with the direction this nation is going.

Many of the speakers echoed their concerns about the current administration gaining office once again. The words “Police State” – “Civil War” –  “Hyperinflation” and “Economic Catastrophe” kept being heard from the stage. My first two sessions were literally standing room only and many people took up seats on the floor. My last session was on Sunday at 2:30PM and still just about every seat was taken.

There were no “silver bullets” being offered except to get ready. The analogy of “Noah’s Ark” was also being echoed a lot. Build your ark now while you still have the opportunity.

Jonathan Cahn was one of the key note speakers and he echoed a lot of what was already being said.

He basically stated that our nation is now seeing God’s judgement and it just going to get worse, that is if we do not repent.

I met Jonathan on the elevator and spoke for a few moments. When I introduced myself he was very familiar with PZ and appreciated our work here. He told me that he wanted to get with me and talk. Negative was that there was a pressing matter and had to leave the conference and fly out at 3:00AM in the morning. I will catch up with him and when I do I will let you know how our conversation goes.

A lot of talk was going on about Syria and the middle east. The general consensus of this was that Assad will resign from power and the Muslim Brotherhood will be put in his place. At least with Assad we know what we are getting. Well we know what we are getting with the Muslim Brotherhood as well. I heard conversations here and there also saying to keep an eye on Jordan, they may be the next to fall to the brotherhood.

Another topic that seemed to be on a lot of people’s minds was how much Russia is really becoming prominent today. People were very upset that our current administration was basically cow-towing to Russia and Putin in particular. Russian troops now being stationed as well as Russian Special Forces being trained in the US. Russian Bombers flying into US Airspace, our reduction of weapons while Russia is stocking up again.

The scenario of Russia coming in under the UN and “policing” the US in the event of martial law was also being spoken and bantered about. It was agreed that this is a viable situation and something that we need to be concerned about as well.

In fact in response to this some asked if we should be concerned with China. It is believed that China and Russia will work together. China is “the brains and money” while Russia is the “muscle and military.” Both will work together if the opportunity presents itself to bring our nation down.

Over all the mood of the conference was very hopeful even in the light of all that is taking place. Tracye and I were very surprised how many people were interested in preparedness and our Shelf Reliance Food. We handed out every card we had for Shelf Reliance and in the few days we have been home, we have taken several orders. 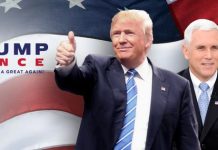 Surviving The Emergency No One Ever Plans For