Friends, do you remember my article about Obama’s 23 Executive Orders that he passed, unilaterally, after Sandy Hook?  I told you that Obama gave Eric Holder the ability to create new ‘labels’ for U.S. Citizens.  One of these labels has been announced as ‘Dangerous Person’.  No definition was given for this new category of U.S. citizens- but Holder has been given the green light to define it and create as many more as he sees fit.  Each of these new categories of people can now be treated differently by the government and by the police.  Example:  one of the executive orders will ensure that a list of  ‘dangerous people’ in a neighborhood will be distributed to the local police who will receive special hand held devices for such purpose.  Why would they need to know who the ‘dangerous people’ are in the neighborhood?  Especially if they have never committed a crime in their lives?

In light of that, I find it interesting that Ron Trowbridge, a Sheriff of Prowers County, CO. participated in a  DHS training course and then claimed that the troopers had been taught that ‘fundamentalist Christians who take the Bible literally’ are ‘dangerous people’ and that local law enforcement should keep a ‘special eye’ out on us.  (*ahem*  is this not a perfect application of those aforementioned ‘categories’ Holder is cooking up?)  Specifically, they were taught that we bible thumpin’ racists would be more prone than the average pagan to joining a thing called, ‘The Sovereign Citizen Movement”, which is considered to be a domestic terrorist group.    Nice, huh?

Let’s just get past the outrage of that statement and move on to the more important question:  How will Eric Holder know if we are bible thumpers and should be labeled ‘dangerous people’- you know, so the local police can quickly identify us?  Well, blogging and facebooking for one.  Did you know that the government (National Security Agency) already stores every email, tweet, text and FB post you have ever written?  Yep- right there in the new Utah Data Center in Salt Lake City, Utah.   Thanks to George Bush, the Patriot Act allowed that years ago.  And with the new Cybersecurity Bill( CISPA) making its way happily through Congress, they will gain even more power over your private data.  All they have to do is search posts that include the search terms ‘Jesus’ & ‘God’ the ‘Bible’ too often.  And trouble makers like me?  Forget about it.  I’m sure they have a special category especially for people like me.

Heck, Obama 23 executive orders also ties you health record (gee, I wonder if any of those pee samples you gave contain any DNA??) &  gun purchases into the determination of your ‘category’!  What more is there to know about you and your family?  They know where you live (oh, yeah, all billing info is also in your medical records), they know your various phone numbers, who all your kin are and even who to call for an ‘emergency’- probably your best friend or neighbor who can be tortured to find you.  Heck.  Have you ever had your eyes examined?  Nice retena scan.  Photos?  Just check out passports & drivers licenses- also linked together.

Now, I want you to imagine what kind of scenario would need to be underway for cops with handheld devices needed to see who all the ‘dangerous people’ are in the neighborhood.   I also want you to consider the fact that the LIBERALS are insisting on armed teachers.   I want to you consider the fact that another of those 23 executive orders is to put a police unit around every single American school.  Guess what?  They will all have hand held units with local ‘dangerous people’ on them.  Photos & medical records and all.  Do you take any kinds of drugs for mental or emotional issues?  hmmm…. sounds ‘unstable’ to me!  Hmmmm… maybe you are a dangerous fundamentalist who takes the Bible literally… hmmm… maybe your kids belong to the Community Collective now (see video below) …  hmmm….. maybe during the next terrorist attack, your schools will be locked down and all potentially ‘dangerous’ people won’t be allowed near that school… hummmm…

Here is my advice.  For those with kids in public schools, keep a REAL sharp eye on current events.  Don’t send them to school if the political environment gets too hot.  They might just not come home again.

An excerpt from the article:

“While Kluczynski [DHS trainer] emphasized that sovereign citizens have a right to their beliefs, he was clearly teaching that the groups he had listed should be watched by law enforcement and should be treated with caution because of their potential to assault law enforcement.  Kluczynski explained why he believed these groups were dangerous saying they were angry over the election of a black president.  When someone in the group suggested the failing economy was probably much more to blame, Kluczynski intimated that those who are not going along with the changes in America will need to be controlled by law enforcement.  Kluczynski even later questioned some of the troopers present if they were willing and prepared to confiscate “illegal” weapons if ordered to.” 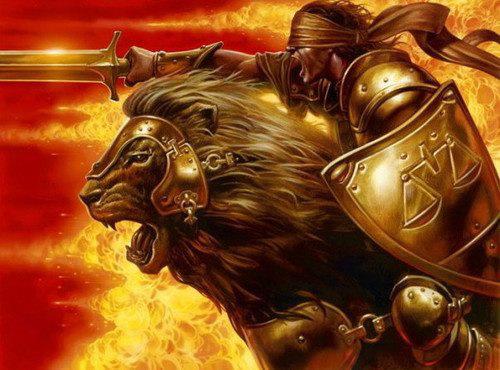 Righteous Anger – The Victorious Warrior or The Compromising Whelp

The Age of American Lawlessness