Proverbs  24:17 (KJV)  Rejoice not when thine enemy falleth, and let not thine heart be glad when he stumbleth:

Last night we heard the news.

Facebook was amass with posts about the death of Muslim Arch Terrorist Osama Bin Laden.

To be honest with you I am not too happy about this on several counts.

Scripture tells us not to rejoice when an enemy dies (falleth). This man is in hell and we should not wish hell on anyone, even our worst enemy.

But I have to say that I have some real serious uneasy feelings about all that is taking place.

I mean look at this. The Navy Seals went in and took him out. Which kudos to the Navy Seals for doing their job. But why has it taken this long? It wasn’t like he was really hiding out in some cave as the liberal press like to report. He was “living” very well in Pakistan. Cushy home, wife, servants, etc.

Look at it this way. They could have almost Google mapped this guy, heck he might even had a iPhone they could have been tracking all this time. It isn’t that hard to find someone if you really want to with today’s technology.

Another thing that really bothers me.

Sorry, but I did not fall off the turnip truck yesterday. This is just to convenient. But what is troubling, reading the news and all out there, no one is asking hard questions.

Are we to believe all this?

In fact Bin Laden has been reported as dead before. Same thing.. no body, no pictures, no official DNA, etc, etc.

We are to believe the same song and dance again?

Well with the help of the liberal press, the average American person is eating it up lock, stock and barrel.

There are just too many questions in this that have not been clearly answered. We are just supposed to accept the “official” statements as fact without any evidence being presented.

Listen, this administration has lied before in the past and they have no problem lying now.

I believe what is taking place is a form of deception to draw the American public’s eye away from something.

It is the same trick that magicians use. Draw the audience’s attention to the right hand, but it is the left hand that is really doing the deed.

Things do not happen just by coincidence, specially with a high ranking figure such as Bin Laden.

There is something else going on here, and my gut says it is going to get worse.

Now another reason that I am not so quick to break into song singing “Ding Dong The Witch is Dead” is that with Bin Laden we knew what we were getting.

What does bother me is  the unknown.

Bin Laden was bad enough, but what Arch  Terrorist is sitting in the side wings waiting for his chance to grab the reins and really try to outdo what Bin Laden has done?

That is what concerns me. New blood always comes in hard charging and eager to make a name for himself.

Folks, the nation has been moved to high alert and we are being primed for some terror attack in retaliation.

Our president is a Muslim and if not full Muslim, he is a hardened Muslim sympathizer. I can see a terrorist attack take place and then all of a sudden this president enact more draconian laws taking even more freedoms away.  Again, everything seems awful convenient. An election is coming up and he need to raise his approval ratings.

He is looking at being a one term president. But if he has it his way, he will manipulate the situation to allow him a second term or worse, forego an election, which has been put out there in a realistic sense.

Now, how probable could that be is another thing.

This is going to come back and bite us in the behind, that is what I feel in my gut. I am not rejoicing about this at all.

What I fear is some form of Isaiah 5 coming to pass upon this nation.

Isaiah 5 – The Judgment of The Nations

I have preached before on Isaiah 5. In this chapter we read how God judges the nation that turns against Him.

Here is that portion of scripture that tells “HOW” God judges at nation. He uses her enemies. What is very interesting is that when you read this, it is clearly presenting today’s Muslim mindset.  One very determined to bring “the mighty Satan,” the US down.

Read this for yourself and see if you agree…

Isaiah 5:25-30 (KJV)  Therefore is the anger of the LORD kindled against his people, and he hath stretched forth his hand against them, and hath smitten them: and the hills did tremble, and their carcases were torn in the midst of the streets. For all this his anger is not turned away, but his hand is stretched out still.

26  And he will lift up an ensign to the nations from far, and will hiss unto them from the end of the earth: and, behold, they shall come with speed swiftly:

27  None shall be weary nor stumble among them; none shall slumber nor sleep; neither shall the girdle of their loins be loosed, nor the latchet of their shoes be broken:

28  Whose arrows are sharp, and all their bows bent, their horses’ hoofs shall be counted like flint, and their wheels like a whirlwind:

29  Their roaring shall be like a lion, they shall roar like young lions: yea, they shall roar, and lay hold of the prey, and shall carry it away safe, and none shall deliver it.

30  And in that day they shall roar against them like the roaring of the sea: and if one look unto the land, behold darkness and sorrow, and the light is darkened in the heavens thereof.

Many in the church today are burying their heads in the sand when it comes to Islam.  Even many in the bible prophecy circles discount Islam and the growth this one world religion has seen.

They refuse to acknowledge that Islam is not only a religion, but also a political, social, legal and financial mindset and way of life.

One reads Revelation 13 and we are told that the antichrist’s rein will encompass all of these, but again, many are refusing to acknowledge it because Islam does not fit in their nice neat scenario.

I still cannot get one bible prophecy teacher to  acknowledge that when Christ returns, all the battles he conducts at the day of the Lord is all with Muslim nations. It is there in black and white. So many people claim literal translation, but when you introduce Islam, all of a sudden they allegorize , twist, paint a different pictures instead of just keeping the simple scripture simple and literal.

Why? Because again it does not fit in the nice neat package that has been preached for the last 50 or so years.

Folks, this new global development I fear is not a good one.

There are too many unanswered questions and made up evidence.

Reminds me of the “birth certificate” that the white house released, to all of a sudden find out that it has been doctored. The white house hacks that did it, forgot to “flatten” the image. So all the layers were still present in the PDF when they converted it.

So knowing that the White House is willing to go to these lengths to lie to the American public about the birthplace of the man who occupies the oval office, it does not surprise me to have these sort events take place that seem so convenient.

I’m predicting a backlash of some sort.

Those who followed Bin Laden loved their leader and took pride in conducting Jihad.

I look at Isaiah 5 and know that there will be those out there that will say ” I should have done [X] when I found out [Y] might happen.”

Eph 6:13  Wherefore take unto you the whole armour of God, that ye may be able to withstand in the evil day, and having done all, to stand.

That evil day is coming and I believe coming soon. We need to purpose in our mind who we will stand with and why.

Psa 144:1 Blessed be the LORD my strength, which teacheth my hands to war, and my fingers to fight.

Remember, these are the same people that were prideful enough to end as many American lives as possible, at their own peril, for their “cause.”

The world is changing right before our eyes and exactly how scripture said it world.

Heylel Ben-Shachar (הילל בן שחר) warriors are growing in strength and influence. His name is written upon their foreheads and they will gladly die for him.

I do not know what tomorrow brings. But no matter what, for me and my household we will serve the Lord.

We are called to occupy till He returns, not retreat to some mountain top.

There is still much work to be done, millions still have no idea who our Savior is and have no knowledge of Jehovah God.

The rubber is meeting the road and His hand is moving over the world.

We are sitting upon the razor’s edge.

I pray God’s Grace upon all of us. That His wisdom be given to us, and that we will clearly discern His will and not our own.

The evil day is coming, we must be ready to stand.

Living For Christ When All Hell is Breaking Loose

Should You Buy Gold or Silver in Preparation for the Coming…

Comfortable in my own s(k)in 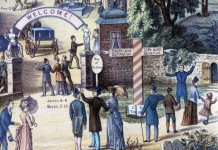