There has been a battle raging within the Church since about the middle part of the 19th century, when a Coptic monk at an Egyptian monastery was building a fire for a guest.

The guest was Friedrich Constantine Tischendorff, who was traveling under the patronage of Fredrick, King of Saxony, in search of old manuscripts.

While staying at the Convent of St Catharine, he noticed some old-looking documents in a basketful of papers for lighting the stove.

On closer examination, he recognized it to be an ancient piece of the Bible. Ultimately, the convent yielded a complete New Testament manuscript dating to about 400 AD.

Tischendorf stunned the world when he unveiled his ‘Codex Sinaiticanus’ the oldest known complete ‘autograph’ [hand-copied manuscript] of the Bible in existence.

“Not so fast,” said the Vatican. “We just happened to have discovered an old manuscript in one of our vaults. Interestingly enough, ours dates to about 400 AD, as well.”

The Vatican’s manuscript was dubbed “Codex Vaticanus” for obvious reasons. The year was 1845.

Until then, the English-speaking world had relied primarily on the 1611 King James Version of the Bible.

But the Age of Enlightenment was sweeping Europe, and the discovery of the two previously unknown codexes (a ‘codex’ is really just a scroll) coincided with the wave of New Thinking.

The discovery of significant differences between the two older manuscripts and the Textus Receptus (Received Text) manuscript relied on by the KJV translators 250 years earlier created an intellectual Perfect Storm.

The oldest existing copy of the Textus Receptus dates to around the tenth century, and was recopied in secret as each old manuscript wore out from the 1st century forward.

King James rejected the Latin Version, and ordered a new English Common Bible be translated from the Textus Receptus.

That set the stage for the battle (that continues to rage to this day) within the Church between the KJV purists and users of other translations.

Many of the combatants aren’t even sure what the battle is about, defending their chosen version primarily on the grounds that it is easier to read.

The controversy behind the battle revolves around those differences between the manuscripts used for the translations. Some of them are very suspicious.

For example, a fundamental doctrine of Roman Catholicism that separates it from most other branches of Christianity is that of infant baptism. Wars were fought over it during the Reformation.

But it seems so clear from the Scriptures. . .

In Acts Chapter 8, the Ethiopian eunuch is reading Isaiah 53 when Philip happens by. The eunuch asks Philip about the passage, and the Scripture says,

“Then Philip opened his mouth, and began at the same scripture, and preached unto him Jesus.”

“And as they went on their way, they came unto a certain water: and the eunuch said, See, here is water; what doth hinder me to be baptized?” (Acts 8:35:36)

Okay, checklist time. Philip shared the Gospel with the Ethiopian. The next thing he asked was, in essence, ‘what are the requirements for baptism?’

There’s no other way to interpret the question. “I heard the Gospel. There’s the water. What’s stopping me from being baptized?”

According to the Textus Receptus,

“And Philip said, If thou believest with all thine heart, thou mayest. And he answered and said, I believe that Jesus Christ is the Son of God.” (Acts 8:37)

See? I told you the whole infant baptism thing seems so clear from Scripture.

If an infant can say that he believes with all his heart that Jesus Christ is the Son of God, then the infant is eligible, by the authority of Scripture, to be baptized.

So what is the controversy? Well, it kinda depends on what translation you are using to support your argument.

If you are using the New International Version that was translated from the Codex Vaticanus, you will discover that your Bible doesn’t have an Acts 8:38.

Acts 8:36 is there, and Acts 8:38 is there, but either you don’t have an Acts 8:37 or there’s an asterisk to the notation, “this verse isn’t found in the best (meaning Vaticanus/Sinaiticus) translations.”

If you are reaching for your NIV to support your argument against infant baptism, the problem becomes immediately apparent.

I personally study the KJV. And I believe there are flaws in the other translations. But I don’t insist that all other versions are either worthless or Satanic.

You see, the reason that I believe there are flaws in the other translations is because guys who CAN read Greek, Latin and Coptic Egyptian compared all three and THEY said there were differences.

But since I can’t read Greek, Latin and Coptic, never translated the TR or the CV/CS, in the end, I am choosing the KJV as the superior text primarily on faith, am I not?

After all, if I am to charge out there and defend the King James Version of the Bible, I should be sure I am defending God’s Word, and not that I am defending what a group of 15th century translators said was God’s Word.

I have my reasons for being suspicious of the Sinaiticus and Vaticanus manuscripts, but when you get right down to it, I don’t know without first looking it up which modern translations are from CV/CS and which are not.

But I doubt they are all demoniacs united in some shared conspiracy.

Actually, I don’t know the names of the KJV translators, where they went to school, or what their motivations were, either.

About all I know for sure is that they translated the KJV first.

But based on what my ‘superior’ translation says, my faith is supposed to be in the Holy Spirit to illuminate God’s Word to me, to make it real, to lead me and guide me, and to be confident that He will not steer me wrong.

But I also know some intellectually honest and spiritually sincere Christians who cannot understand a word of it. It isn’t because they are too thick. It’s because they can hear Him speak to them through another translation.

Logically, if the only valid translation is the KJV, does that mean that anybody who uses a different version is a bad Christian? Or more susceptible to deception?

Is the Holy Spirit limited in what He can impart spiritually to a sincere believer by the physical arrangements of English words on paper?

Is that all it takes to shut God down?

So, you may ask, “how many Bibles are there? God only wrote one Bible.”

(I agree. But He published it in Hebrew and Greek, so He left His Spirit here to help the rest of us understand it all — without it losing anything He wants us to know in the translation.)

Must the Swahili Bible be translated from the English KJV to be valid? Or the Russian Bible? What about the French? (Well, theirs would be in French, and therefore, superior in any case, so that’s a bad example)

Debating about the superiority of the various Bible versions is as much an exercise in intellectual pride than theology.

Don’t believe me? What does it mean if you win the argument? Think that through for a second.

He won’t be any more saved, but you can bet you haven’t strengthened his faith in the Bible. If he still can’t understand the KJV, and he goes back to his more comfortable version, he’ll be too guilt ridden and suspicious of it to get anything out of it.

And since he can’t follow the KJV, it means that you won the debate — but he’s left without his Bible. Congratulations.

(Well, ok, then, but when you finish making this argument, be sure and get up. God may want to take His throne back.)

“For when for the time ye ought to be teachers, ye have need that one teach you again which be the first principles of the oracles of God; and are become such as have need of milk, and not of strong meat.” (Hebrews 5:12)

Now, that verse raises yet another debating question. Which is ‘milk’ and which is ‘strong meat’?

Trusting in a particular English translation of a Book? Or trusting in the Personal tutelage of its Author? 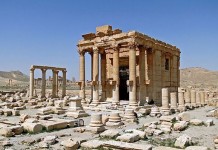 The Temple Of Baal Coming To New York Will Be Followed…