Today’s column won’t be a rant about how Casey Anthony got away with murdering her baby daughter because of incompetent prosecutors, unscrupulous defense attorneys or a gullible jury.

When Jesus was outlining the signs of the times, the one characteristic they all shared was that they would be exponential – whatever sign is under consideration, to qualify as a ‘sign’ there must be evidence that it is also increasing in frequency and intensity.

“Wars” is not a sign – there have always been wars.  But right now, the US (with the UN) is engaged in no fewer than four separate wars; Iraq, Afghanistan, Yemen and Libya.  Not to mention ‘rumors of wars’ as in Iran, China, Russia, North Korea, Syria and Israel.

“Famine” is not a sign – the Bible records seven years of famine during the days of Joseph the Patriarch.

Famines have occurred throughout history wherever there are concentrations of people – but today, we are looking at famine on a worldwide scale unseen in human history.

We don’t call it “famine” anymore – now we call it food security- but it means the same thing.  And according to the UN, one person in six will go to bed hungry tonight.  Ten percent of Americans, according to one estimate, are on some form of social welfare system, including food stamps.

“Earthquakes” do not, by themselves, constitute “a sign” as far as the Olivet Discourse is concerned.  There were earthquakes in Jesus’ day; there have been earthquakes ever since.

{pub}To read this entire article you need to become a PZ Insider http://tinyurl.com/Become-A-PZ-Insider {/pub}{author}But five of the ten most powerful and deadly earthquakes in the history of man have occurred in the last ten years.

Earthquakes measuring more than 7.0 have been on a steady, discernible increase in frequency and intensity since 1948.  The list of major earthquakes since the turn of this century is already as long as the list for all of the last century – and still growing.

Jesus said to watch for signs in the “sun, moon and stars” which by itself, isn’t much of a sign.  Mankind has used the sun, moon and stars to tell time, navigate ships, discern the weather, calculate tides and so forth throughout human history.

“And there shall be signs in the sun, and in the moon, and in the stars; and upon the earth distress of nations, with perplexity; the sea and the waves roaring . . .” (Luke 21:25)

The real sign is that these signs will engender fear and confusion (distress and perplexity) on a national and international scale.

“Men’s hearts failing them for fear, and for looking after those things which are coming on the earth: for the powers of heaven shall be shaken.” (Luke 21:26)

Note the reference to the “sea and the waves roaring.”  What does that have to do with the “distress of nations”?  Why would entire “nations” be either afraid or confused at the prospect of a storm at sea?

Entire nations are convinced against all logic that melting polar ice caps will cause sea levels to rise, shorelines to disappear and millions of people to become homeless.  It is utterly irrational – but the fear is real enough.

(Try this experiment. Put three ice cubes in a glass and fill the glass to the brim with your favorite beverage.  Put the drink in the sun and watch the ice cubes melt.  Record the point at which the melting ice cubes cause the drink to overflow.)

Millions are convinced that human activity that produced carbon dioxide (necessary for plants, who convert it to oxygen) and nitrogen (necessary for the growth of all living things) are really deadly gases that cause global warming.

They are so convinced that they are willing to pay practically anyone practically anything in return for some kind of clean, renewable energy source – to the point of impoverishing their own country, if necessary, to reduce the levels of gases necessary to sustain life on earth.

Global warming is also occurring on other planets in the Solar System, like Mars and Venus – or it was.  The warming trend on those planets began to reverse itself about the same time that temps started to cool on earth.

For True Believers, this is just an amazing coincidence!

“And because iniquity shall abound, the love of many shall wax cold.”

To my mind, this is the most convincing sign of all.  Merriam-Webster defines “iniquity” as “gross injustice: wickedness”.

The Geek word translated as ‘iniquity’ in 1611 is translated from the Greek word anomia — which has a slightly different meaning and flavor.

While gross injustice is a close fit for anomia, a closer fit is “lawlessness” which then would read as follows:

“Because lawlessness shall abound, the love of many shall wax cold.”

Lawlessness has been part of the human equation since the Fall of Man.  The whole purpose of government, first and foremost, is to address individual lawlessness.

So for lawlessness to be a sign, there must needs be lawlessness on a grand scale in an environment where lawlessness would be unusual enough to merit special attention.

For example, a country founded on the principle of the rule of law — and with a history of dictating the rule of law to others — that suddenly and profoundly abandoned that principle would qualify as a sign, but only within a greater context.

America, for example, was founded exclusively on the principle that all men are equally answerable to the law under the Creator.

Later, America was instrumental in the foundation of the United Nations, which was created for the express purpose of ensuring the rule of law on a global basis.

Both have abandoned the rule of law in favor of the hopey-changey policy of only enforcing laws that serve their political purposes.

As the rule of law breaks down, Jesus said, the love of many will “wax cold” – people will become more brutal, less compassionate, less willing to put themselves out for others, less forgiving, less understanding, and more willing to be governed by playing on emotions than by adhering to the rule of law.

Of all the signs of the last days, this seems to me the most profound.

In 1948, as the nation of Israel was taking its seat at the council of nations, the Rule of Law had just been tested and reconfirmed by WWII, with oceans of blood spilled in the process.

The UN was created expressly to give aggrieved nations a place where they could seek redress of those grievances under the Rule of Law.  The UN has since become the very symbol of global lawlessness, from “Oil for Food” to the Darfur Genocide.

For North Korea to serve as the Conference on Disarmament’s president is the very definition of lawlessness writ large.

What’s next?  Iran as vice-president of the UN’s General Assembly?  Iran, whose president has repeatedly called for the total destruction of the Jewish State?   Iran, who claims the US and Israel are the world’s two greatest terrorist states?

Iran, the nation that repeatedly lied to the UN, abrogated all its non-proliferation treaties, and now constitutes THE single greatest military threat to the EU on the Continent?  THAT Iran?

Ummm, yes.  Noted Cliff May in the National Review:

“A few days ago, the regime that rules Iran, designated by the U.S. State Department as the world’s most active state sponsor of terrorism, held what it called the First International Conference on the Global Fight against Terrorism. The U.S. and Israel were singled out as “satanic world powers” with a “black record of terrorist behaviors.” This should have been the subject of scorn and ridicule from the “international community.” But senior officials from at least 60 countries attended and U.N. secretary general Ban Ki-moon delivered a message via special envoy expressing his appreciation to Tehran. Apparently he was not bothered by the fact that Sudanese president Omar al-Bashir, indicted for genocide by the International Criminal Court, was among those attending.”

Yes, THAT Iran was elected by the General Assembly to serve as that body’s vice-president.

Because lawlessness shall abound, “hate crimes” will abound as well.  In many places, it is tantamount to a “hate crime” to call illegal aliens “illegal aliens” instead of the wildly inaccurate designation of “undocumented immigrant” – a phrase as oxymoronic as “evil do-gooder” or “honest thief”.

There are entire cities that have dedicated themselves to defying the Constitution and the rule of law, simply because they don’t like the law as written.  They are called “sanctuary cities” — but they provide ‘sanctuary’ for a particular brand of lawlessness.

In our increasingly lawless global society, Christianity is rapidly becoming a synonym for ‘hater’ — based entirely on the premise that salvation by faith in Jesus Christ alone excludes those that reject Christ and is therefore hateful.

The fact is that those who reject Christ also reject the “Christian” heaven – but it’s a hate crime to tell them they can’t go to a place they don’t believe in.

It is also a ‘hate crime’ to tell them how to get to go to the place they don’t believe in by introducing them to the Christ that offers them the price of admission.

What is not hateful is Islam, widely feted by US and other Western officials as “an honorable religion of peace and love that has been hijacked by a few extremists.”

In fact, calling Islam ‘hateful’ is in fact a hate crime in many Western countries, including most of Europe and all of Canada.

There is an effort ongoing in the United Nations to make defaming Islam a crime, whereas defaming Christianity is a protected human right.

See?  It wasn’t a rant about how Casey Anthony got away with murdering her daughter.

Jews and Others Against Israel

Prophecy: What Lies Ahead 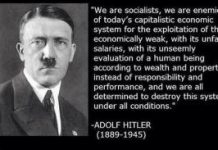