Officials with the city of Houston, Texas, who are defending a controversial ordinance that would allow men to use women’s restrooms now have demanded to see the sermons preached by several area pastors.

The recent move came in a subpoena from the city to pastors for copies of their sermons and other communications in the city’s legal defense of a “non-discrimination” measure that allows “gender-confused” people to use public restrooms designated for the opposite sex.

A lawsuit challenging Houston’s move alleges the city violated its own charter in its adoption of the Equal Rights Ordinance, which in May designated homosexuals and transgender persons as a protected class.

Critics say the measure effectively enables sexual predators who dress as women to enter female public bathrooms, locker rooms and shower facilities. A coalition of activists that includes area pastors filed suit Aug. 6 against the city and lesbian Mayor Annise Parker after officials announced a voter petition to repeal the measure didn’t have enough signatures to qualify for the election ballot.

Parker, who has acknowledged the ordinance is “all about me,” was legally married to her same-sex partner in California in January.

The Alliance Defending Freedom has filed a motion to quash the city’s demands to see the sermons. ADF argues the pastors are not party to the lawsuit, and the city’s strategy doesn’t meet the requirements of state law that requires such efforts “be reasonably calculated to lead to the discovery of admissible evidence, not be overly broad, seek only information that is not privileged and relevant to the subject matter of the litigation, and not cause undue burden or harassment.”

ADF said city officials “are upset over a voter lawsuit filed after the city council rejected valid petitions to repeal a law that allows members of the opposite sex into each other’s restrooms.”

ADF attorneys say the city is “illegitimately demanding that the pastors, who are not party to the lawsuit, turn over their constitutionally protected sermons and other communications simply so the city can see if the pastors have ever opposed or criticized the city.”

“City council members are supposed to be public servants, not ‘Big Brother’ overlords who will tolerate no dissent or challenge,” said ADF Senior Legal Counsel Erik Stanley. “In this case, they have embarked upon a witch hunt, and we are asking the court to put a stop to it.”

ADF Litigation Counsel Christiana Holcomb said the city’s subpoena of sermons and other pastoral communications is needless and unprecedented.

“The city council and its attorneys are engaging in an inquisition designed to stifle any critique of its actions. Political and social commentary is not a crime; it is protected by the First Amendment,” she said.

While the public submitted more than three times the legally required number of petition signatures to require city action, and the city secretary certified the number as sufficient, the mayor and city attorney “defied” the law and rejected the certification, ADF said.

“The message is clear: oppose the decisions of city government, and drown in unwarranted, burdensome discovery requests,” said a brief in support of the motion to quash. “These requests, if allowed, will have a chilling effect on future citizens who might consider circulating referendum petitions because they are dissatisfied with ordinances passed by the city council.

“Not only will the nonparty pastors be harmed if these discovery requests are allowed, but the people will suffer as well. The referendum process will become toxic and the people will be deprived of an important check on city government provided them by the charter.”

WND has reported similar measures in other jurisdictions across the country. Opponents point to incidents such a man in Indianapolis who allegedly went into a women’s locker room at a YMCA and watched girls, ages 7 and 10, shower.

The coalition had submitted more than 55,000 signatures in the referendum drive. City Secretary Anna Russell confirmed in writing Aug. 1 that the petition sponsors had submitted 17,846 qualified signatures, nearly 600 above the minimum 17,269.

However, City Attorney David Feldman announced 2,750 petitions were invalid because of “technical problems.”

Opponents have argued Feldman did not have the authority to step in and make the decision and that it should have been handled by the courts.

Critics dubbed the Houston law the “sexual predator protection act,” claiming that by designating transgender or gender-confused persons as a protected class, women and children are threatened by predators seeking to exploit the ordinance’s ambiguous language.

“I want to protect my wife, daughters and granddaughters from being exposed to the dangers of male sexual predators masquerading as women in women’s public bathrooms and other facilities,” he said. “This is why it has been called the Sexual Predators’ Protection Act.”

Similar cases also have erupted in Maryland, Florida and Colorado, which adopted a radical “transgender nondiscrimination” bill in 2008 that makes it illegal to deny a person access to public accommodations, including restrooms and locker rooms, based on gender identity or the “perception” of gender identity. One consequence of the law is a ruling forcing authorities to permit 6-year-old Coy Mathis – a boy who says he thinks he’s a girl – to use the girls bathroom at his elementary school.

Nationwide, 17 states and the District of Columbia have embraced the transsexual agenda. Rhode Island added “gender identity and expression” to its anti-discrimination law in June with the support of Gov. Jack Markell, and Delaware Attorney General Beau Biden announced his support in an Equality Delaware video.

But other attempts to advance the transsexual agenda were defeated in Montana, Missouri, North Dakota and New York, where state Senate leaders refused to allow a vote.

Here what happened in Washington state:

The Obama administration is solidly behind the move to open locker room doors to some members of the opposite sex. 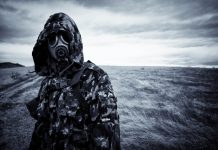 Now It Is The Elite That Are Feverishly ‘Prepping’ For The…