I guess I don’t understand all the hubbub. Why are Houston’s pastors objecting to turning over their sermons to the government? Haven’t they told all of us to “obey the authorities?” Doesn’t Romans 13 demand that we obey un-Godly government?

That is what I thought of when I heard the pastors get all riled up about the lesbian mayor in Houston demanding to see their sermons. Hand it over, girls. The government is established by God to do good…remember?

It made me chuckle. Aren’t these guys supposed to be “watchmen”? Isn’t it part of their job to see the wolf coming and warn the folks? Instead, they have told us that God wants us obeying lesbian mayors…unless it directly involves them.

I’m sorry, but there is a part of me that wants to tell them that they got what they deserve. Funny, isn’t it? They only get mad when THEY are the ones violated.

The time to close the barn door has long since passed. They thought they were safe hiding from the world inside their stained-glassed fortresses. The devil’s spawn has found where they hide and they have finally breached the wall.

“God has not appointed us unto wrath”, the pastors foolishly instructed their flocks. “All we need to do is hide inside this building and wait for Jesus to come and rescue us. Let’s keep ourselves unstained by the world.”

“Religion and politics don’t mix”, they told us. “Our job is to preach the Gospel, get souls saved, and not pollute our pulpits by talking about worldly matters. This world is not our home.”

But, unfortunately, they forgot that we have to live in this world. They neglected the mandate to “occupy until I come.” They ignored the precept that “when the righteous are in authority the people rejoice; But when the wicked bear rule the people mourn.”

Jesus hasn’t come yet, but the government officials are beginning to. The modern day preaching of Romans 13 has forfeited the Church’s authority. The pastor’s exhortation to obey wicked government leaders and edicts has opened the gates to a hellish assault upon all things good.

This may come as a shock to you, but Jesus is above Caesar. Render unto Caesar what is Caesars? God owns everything. Caesar owns only what we yield to him.

I’m sorry, but this is not what the Lord had in mind when He went to the Cross.

“Behold, I send you forth as sheep in the midst of wolves; Be ye therefore wise as serpents and harmless as doves. BUT BEWARE OF MEN FOR THEY WILL DELIVER YOU UP TO THEIR COUNCILS AND SCOURGE YOU IN THEIR SYNAGOGUES. And you shall be brought before governors and kings for my sake for a testimony AGAINST them and the gentiles. But when,(NOT IF) they deliver you up, take no thought how or what you shall speak; for it is not you that speaks but the Spirit of your Father which speaks in you…and you shall be hated of all men for my Name’s sake.”

You shall be hated of all men…when was the last time that was preached in Houston?

America’s pastors have become so heavenly minded that they are of no earthly good. If the devil and his minions are not interested in controlling the world, why is it that everywhere I look…our money, government buildings, entertainment…I see symbols of their Luciferian activities?

Better yet, how can a lesbian get elected to the highest office in the city of Houston in the first place? If we are “not of this world” what does it matter? If the pastors in Houston are so hell-bent on following Romans 13, then why would they object to turning over copies of their sermons? Come on girls, turn over the evidence. Uncle Sam wants to see what you have been saying about him.

I don’t know why they are worried. Most of them have not said a damn thing about lesbianism and the frontal assault on Christianity the homosexuals have been engaged in for the last three decades. How do I know? The mayor ran as an “out and proud” lesbian and got elected. Why would the pastors be surprised when she swings the strong sword of government against her enemies?

The barn door can no longer be closed. The homosexuals own the barn.

It’s just the beginning, girls. They are coming for your churches.

You didn’t stand up when prayer and Bible reading were removed from the schools. You didn’t fight when they legalized the murder of the unborn. You remained silent when homosexual sodomy was legalized and force fed to your children. You offered nary a peep when our Constitutional rights to free speech and privacy were suspended in the name of security. You blathered on about how “it will be a cold day in hell when they force me to marry homosexuals.”

Better get your ear muffs and long underwear out; things are beginning to cool off.

They are going to make you marry homosexuals. They are going to throw you in jail and seize your church if you don’t. The devil and his kids do not play fair…they play dirty. You’re going to experience first-hand whether or not you will avoid “the wrath” you assured us we would not have to endure.

History will record that at no time in world history were a group of pastors more complicit in the advancement of evil than the current crop of man-pleasers currently filling America’s pulpits.

Forty million “Christians” voted for the most pro-homosexual, pro-abortion candidate in the history of America. Twenty million more didn’t even bother to vote. Politics is dirty business. Let’s not mix the sacred with the secular, pastors tell us. Christians gave us the government we have.

Sorry girls…obey Romans 13 and turn over your sermons. It’s only the beginning of what is coming.

How to Make Money with a Young Living Essential Oils Business 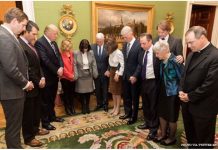