The following is an excerpt from an Associated Press story dated today, during which President Barack Obama and Israeli Prime Minister Benjamin Netanyahu will be meeting at the White House:

U.S. President Barack Obama’s endorsement of a longstanding Palestinian demand on the borders of their future state sets the stage for what could be a tense meeting with Israeli Prime Minister Benjamin Netanyahu on Friday.

Netanyahu, who has had strained relations with Obama, headed for Washington saying the president’s vision of a Palestinian state on the borders of 1967 – as part of his vision for an elusive U.S.-brokered peace deal – could leave Israel “indefensible.”

The White House talks had never been expected to yield any significant progress to revive long-stalled peace talks, but now that prospect seemed dimmer than ever.

Obama, in a policy speech on Thursday on the “Arab spring” uprisings across the Middle East, laid down his clearest markers yet on the compromises Israel and the Palestinians must make for resolving their decades-old conflict.

His position essentially embraces the Palestinian view that the state they seek in the West Bank and Gaza should largely be drawn along the lines that existed before the 1967 war in which Israel captured those territories and East Jerusalem.

On the eve of Netanyahu’s visit, it was seen as a message that Obama expects Israel to eventually make big concessions. 1

Already – and rightly so – Israel’s response to President Obama’s position has been anything but positive and rightly so. As Netanyahu has stated, Israel agreeing to any such plan would leave it virtually indefensible in a region where it is bordered by numerous less-than-friendly neighbors. Not only is the plan supported by Israel-hating nations everywhere (and now the U.S. to our shame) perilous to Israel, those supportive of it have very short memories.

Clearly forgotten by leaders around the world and the Obama administration is what happened after Israel surrendered a mere portion of the lands gained in the Six Day War of 1967 when the Jewish state gave the ‘peace-seeking’ Palestinians the Gaza Strip in 2005.

Far from being a concession on the part of Israel that brought the troubled Middle East closer to peace, from the time of the withdrawal until now Gaza has served as a base for terrorist attacks to be directed against Israel. On a number of occasions Israel has had to enter and attack areas of Gaza because of near relentless mortar and rocket attacks being launched against Israeli civilians from there and yet President Obama has chosen to take the position of Israel’s enemies, which are no less enemies of the United States ironically. His decision to do so, if left to stand, will have negative consequences at the very least, both for Israel and the United States.

What Is Coming Versus What Is Expected

As we examine bible prophecy, it is crystal clear that Israel is going to be more and more isolated in the days and years leading up to Christ’s visible, physical, bodily return to the earth. Israel is going to become such a burdensome stone (Zechariah 12:3) to the world that eventually we’re told the following is going to occur in Joel 3:2:

I will also gather all nations, and will bring them down into the valley of Jehoshaphat, and will plead with them there for my people and [for] my heritage Israel, whom they have scattered among the nations, and parted my land.

As we see in the verse above, all nations – yes all – are going to be gathered to the troubled Middle East in the lead-in to Christ’s return at Armageddon, after which He is, as gently as I can put it, going to take issue with the fact that His lands have been parted. My concerns, based on the Scripture above, are obvious it would seem.

Whether he realizes it or not, President Obama has put the United States in the crosshairs of Almighty God by taking the very position Israel’s most despicable enemies have been seeking for many years. God’s Word makes it clear that anyone (or any nation) guilty of threatening Israel is subject to His wrath which doesn’t bode well for the United States.

God told Abraham, as we see in Genesis 12:1-3, that if Abraham and his family would settle in a land which God showed him (Israel), God would deal with those Abraham and his descendants interacted with from that point forward on the following basis: “I will bless them that bless thee, and curse him that curseth thee.”

By taking the position of Israel’s enemies, which includes the Palestinians and all those who support them, President Obama, whether knowingly or not, has placed the United States on the wrong side of God. What consequences will come of that unfortunate action are unknown, but consequences will come unless public opinion (and poll numbers) require President Obama to have a change of heart. And with an election coming next year which the president would like to win? Perhaps this is a time when voices in favor of Israel can be heard and potentially bring about some change.

Speaking of there being some hope for change, hope and change being two words President Obama loved in 2008, some of our leaders in Washington have expressed disappointment and disagreement with the president concerning the position he has taken. We should all be prayerful that those voices will be heard and their wise counsel heeded. Beyond prayer, the voice of the God-fearing Church, should be heard by its actions, among which should be votes in upcoming elections being cast in favor of those in Washington who speak out and attempt to act against this woeful foreign policy decision. Righting the wrong that has been done in this instance is in the best interest of both Israel and the United States. Make no mistake about it, it’s God’s will, a statement I make fully supported by Scripture.

Some will look at what I’ve written in totality and say, “We can’t stop what’s meant to be, Mike. You’ve already shown us bible prophecy says the whole world is going to turn against Israel so why bother?” My response to that is yes, it’s going to happen, but we’re not here in this world to rest on our laurels. It is our duty to be the salt of the earth and the light of the world (Matthew 5:13-16). As such, we should do everything within our power to ensure Israel doesn’t stand alone on our watch.

Until relieved of duty by way of the Rapture of the Church or death, as Christians we are to be about our Father’s business. I can think of no better business to be about today, when Israel’s Prime Minister is in Washington meeting with our President after being thrown under the bus, than expressing our disappointment and opposition to President Obama exerting pressure on Israel to leave its borders indefensible in order to gain a peace the Palestinians don’t truthfully even want with them to begin with, as the Gaza withdrawal and subsequent attacks launched from there in the aftermath of that good faith gesture clearly demonstrate.

In closing, be heard Church! Be heard and seen expressing solidarity with Israel and its people bearing in mind that God has given us His word that He will extend blessings to our nation if we do so. That should be motivation enough for all of us to get involved in having a voice where unconditional U.S. support of the Palestinians and the terrorist thugs they harbor, not to mention vote into key positions in their government, is concerned.

Under the leadership of President Obama, our foreign policy is becoming that of one nation which thinks itself above God as opposed to “one nation under God” and we can’t afford that in any sense of the word.

God is unmistakably pro-Israel and there are no in-betweens. We’re either for Him or against Him. As a nation, we are going to reap that which we sow and I humbly pray we will strive to do better than President Obama did for us by taking the side of Israel’s enemies in yesterday’s speech. If not, nothing but heartache lies ahead.

21 Statistics About The Explosive Growth Of Poverty In America That… 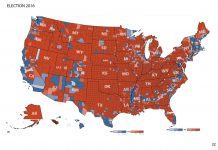 A Nation Divided – Our Chance To Do Something – Be…