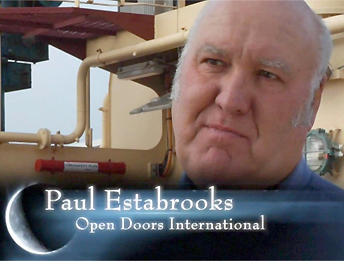 This stage of persecution is characterized by unchecked ridicule and disinformation against a targeted group (Christian or others), most often spread through media. In this stage Christians are robbed of their good reputation and the right to answer the accusations made against them. Media, politics, entertainment, publications and schools are most often the avenues used to spread such insinuations or lies.

If disinformation about any group is disseminated long enough, no one will help in later stages because of this negative brainwashing about them. It essentially dehumanizes the person and is a pattern of thinking that may make it easier for milder wrongs to ignite a chain reaction of events. It creates an “us-versus-them” mentality.

A classic historic example is the gross disinformation the German Nazis spread about the Jews, which then developed into a literal negative symbol, when Jewish homes and businesses were marked with “Stars of David” and then targeted.

This also can result in verbal stereotyping. In the Rwanda genocide, the term “cockroach” became a negative classification of all Tutsi as conspirators against the government.

There are many significant global examples of disinformation used against our Christian brothers and sisters. The influence and impact of negative television programs against Protestant Christians in an autonomous region in Central Asia is very strong. A local pastor was shown on TV and, without reference to any evidence, labelled “an enemy of the state.” His family members’ pictures were also shown at the same time causing them to be despised by their community.

Recently a Christian woman who was shown on TV was not able to continue her work in a kiosk in the market. Other vendors forced her to leave the bazaar.

One local pastor says, “Since the program is shown regularly on TV, persecution has become worse. Some people have left the church out of fear. When you start to preach (to the public), people close up and say, ‘we have heard about you, we don’t want to listen.’”

In North Korea, the entire society is controlled by propaganda and disinformation. Persecution is so severe that in many Christian families, children are not even told about the family’s faith in Jesus until they are young adults because they are encouraged and expected to inform on their parents while in their school years. Christians are considered “enemies of the state” and the disinformation about this is widespread.

Similarly, in countries like Laos, the government disinformation is that Christianity is an American religion being used to infiltrate their country rather than the former military methods. All Christians are thus portrayed as being traitors and working for America.

RESPONSEToday I will work for truth and quash all attempts at disinformation against followers of Jesus everywhere.

PRAYERLord, grant Your blessing today on Your followers suffering from lies and untruths.

Psychology and Psychiatry: Rotten to the Core

Israel – America – God’s Judgment – Will This Be Our…