If find all this very interesting and telling of where we are in regards to our nation is today.

Today we exile one of TVs most popular show’s star. Who knows what tomorrow brings…the gas chamber?

” HEY MARGE… here he goes again, getting all tin foil hat on us again.”

Tin foil hat or not, there are people not taking this seriously and many christians are just out and out dismissing it. But when you start peeling back the layers, well this is more nefarious than when you first look at it.

Think for a moment, here is Duck Dynasty, TV’s HIGHEST rating show ever, that means cable and network TV. The money, the advertising, the viewers, the most ever.

And what does A&E do? Sides with the sodomites and dismisses Phil Robertson.

He spoke his opinion, which last time I thought was a freedom endowed to us by our Creator. At least that is what the Bill of Rights says.

But who pays attention to that silly ol document anymore anyways?

Folks, if you are a bible believing Christian you do not need to be dismissing this as some trivial news piece. 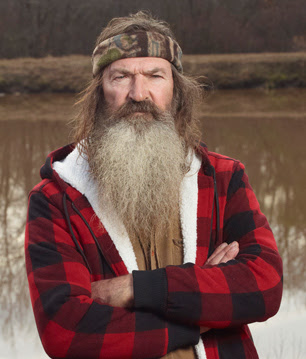 Here A&E networks is willing to dismiss the star of TVs most watched show in history over what? A few words of literal truth?

For those of you who do not know, here is what Phil Said in a GQ Magazine Interview …

“Everything is blurred on what’s right and what’s wrong… Sin becomes fine. Start with homosexual behavior and just morph out from there. Bestiality, sleeping around with this woman and that woman and that woman and those men. …Don’t be deceived. Neither the adulterers, the idolaters, the male prostitutes, the homosexual offenders, the greedy, the drunkards, the slanderers, the swindlers—they won’t inherit the kingdom of God. Don’t deceive yourself. It’s not right.”

Later in the interview he stated the following…

“It seems like, to me, a vagina—as a man—would be more desirable than a man’s anus. That’s just me. I’m just thinking: There’s more there! She’s got more to offer. I mean, come on, dudes! You know what I’m saying? But hey, sin: It’s not logical, my man. It’s just not logical.”

You know what? I totally agree with him.

So what is wrong with stating the truth and one’s opinion?

If your a Bible believing Christian, it means you will be put on trial in the court of public opinion and left to rot. If we were living in Rome, he would have been crucified as were many other Christians.

I point all this out because if the powers that be are willing to do this to TV’s top rated show and the show’s star, with a willingness to put millions upon millions of dollars at stake, then they have absolutely no problem doing it to us, the plain bible believing Christian.

People need to wake up and smell the coffee.

This is EXACTLY what the Nazi’s did in Germany. They vilified, demonized, demoralized the Jew. They attacked their businesses and wrote laws targeted against them.

The powers that be are doing the exact same thing today to bible believing Christians.

But when are people going to wake up to that fact and start paying attention to the writing on the wall?

Folks, they have built hundreds of FEMA camps for a reason. The Gov is not going to dump billions into building these facilities and not use them.

The Gov interned people during WWII. So what will they use these camps for? Most likely to intern Bible believing Christians in the days ahead.

I am not some prophet, but it does not take a prophet to see what is coming. That is if you are willing to pull your head out of the sand and look around.

Hmmmm…I wonder what the shower facilities are like at Camp FEMA?

PZ NOTE – Just to emphasize what I am saying…

Credit Card Nation: Why The Facebook Killer And The U.S. Congress…

How has the professing church in America taught Dolly Parton to…

Europe & Germany in Prophecy: Are the Armstrongites Right?