“Talk is cheap.” Heard regularly on athletic fields across America.

I better warn you. You have walked in during one of my rants. You might be better off if you just turned and walked out the same way you entered.

Don’t let the door hit you on the way out…

I am sick and tired of the Christian-weenies. The cowardice of the average American Christian male is disheartening.

There is a difference you know…between a male and a man. The nation is peppered with Christian males, but you will look long and hard before you set your eyes on a Christian MAN. Male by birth, man by choice.

We are in the mess we are in because of it…the lack of Christian men. The “war on women’ is all of the rage in the media during this election season. But a war on manhood has been going on for at least two-generations.

The other day a friend of mine wanted to introduce me to a guy he had recently met. “You’ll love him Coach. He is a man’s man.”

I didn’t have to ask him what he meant by that description. He knew, and I knew, what a “man’s man” really is. They are rare today…especially in the church. Most are passive men, neutered and gelded by the feminization of the culture.

The average “man’s man” wants nothing to do with church. As a man once lamented to me after having heard me speak, “I have been fighting to hang on to my balls ever since I walked the aisle.”

Even worse, the average pastor has no idea what to do with a man’s man. Most are looking for “Yes” men who obediently follow the lead of their shepherd. The last thing they want to deal with is a boat-rocker, one who makes waves inside the pastor’s “love boat.”

I find it revealing that the most popular Christian film of the year is Courageous. Finally, some one is realizing that Christian testosterone is a good thing.

Nothing has contributed more to the demise of America than the “metro-sexualization” of the American male.

Our churches are the worst. From moussed-haired, skinny-jeaned, metro-sexual “worship pastors,” to insolated and isolated mega-church “Preaching Pastors,” they are sissified males who model a pacified, effeminized version of Jesus.

At a time when our pulpits need testosterone-filled Ted Nugents we get estrogen-loving Teddy Bears. It is no wonder the “saltless church” is getting its butt kicked all across this nation.

They talk a good game….give lip service…but very few are willing to walk the talk. They are deceived, ignorant, or cowardly. None of the three is acceptable for a leader. Most have traded their backbone for a wishbone. Wishing ain’t much of a plan when at war.

Sorry if I don’t sound very “Christian,” but our leadership sucks. The pulpits of America are filled with man-pleasers who are striving to do all they can to appease their customers.

Their real job is to train, equip, and mobilize their “flock” for the work of the ministry. They have done a putrid job. They are weak role models, displaying a weak, compromising Savior.

They love to visit the hospital to pray with the “saints,” but they are MIA on the battle field where the saints are being destroyed.

Jesus said “Be of good cheer, for I have overcome the World.” That’s a pretty big deal to me. He overcame so that we could overcome as well. “Thy Kingdom come, Thy will be done ON EARTH, as it is in heaven.”

Passive leaders. Instead of God’s Generals we get God’s Nursemaids. What leader worth his salt would want to keep his troops dependant on him for his daily struggles? Why haven’t our pulpits raised up men who will raise up other men? Duplication of oneself is the greatest demonstration of leadership.

I have heard from men who want to come to my Spiritual Bootcamp…but they first have to get their pastor’s approval. Can you believe this crap? For heaven’s sake GROW UP!! It is time you were weaned off of your pastor’s milk! He should be pushing you out the door…no wait…leading you out the door! Put on your big-boy pants, fellas.

Can I cut to the chase? Our “church system” is producing passive men. They claim to “serve the Lord” yet they bow to every un-Godly authority that crosses their path. Lip service. It reminds me of my dog hanging his head out of the car window. It’s all just lips flapping in the wind.

Should we “obey God or man?” We all know the answer to that question. But Christian men cower in the corner, sucking off of the pastor’s teat, while the very future of their children hangs in the balance.

The men lived in different times, fought different battles, and overcame different obstacles. They used the same Bible, but today we have a different Gospel. At some point we traded the True Gospel for a gospel of appeasement? It is time for us to man-up

Look at the pathetic response from the Catholic Church over birth control. Instead of Bishops and their flocks surrounding the Capitol and demanding someone reign-in the Communist who reigns over us, we watch them grovel at the feet of the political system begging for “our rights.”

“Please Mr. Obama; may I have another cup of porridge?”

We have yielded our schools to the enemies of the cross. We have permitted the slaughter of the innocent in the security of their mother’s womb. We have sat in our churches and sucked on the nipple while they have legalized the deviant in the name of liberty. We have “prayed for our leaders” while our tax-dollar have been used to submerge a crucifix in urine. They have attacked public prayer, public religious expression, and all manner of God-given free exercise of faith.

“Please Mr. Obama; may I have another cup of porridge?”

We are nothing more than sniffling, powerless, pampered, pabulum eating, weak-kneed off-spring of the King of Kings. I question if most of them are even saved.

Wake up Christian!! The same Spirit that raised Christ from the dead dwells inside your mortal body!! It is time to come out of the closet.

I look at my precious 16-month grand-daughter and wonder what un-spoken horror she might have to go through because of the cowardice of her “Grampy’s” generation.

He that overcometh shall inherit all things; and I will be his God, and he shall be my son. But the fearful, and unbelieving, and the abominable, and murderers, and whoremongers, and sorcerers, and idolaters, and all liars, shall have their part in the lake which burneth with fire and brimstone: which is the second death. -Rev. 21:7-8.

Interesting, isn’t it? The first sinner that the Lord identifies is the fearful. No wonder the world is marching all over the church.

“Men’s hearts failing them for fear, and for looking after those things which are coming on the earth: for the powers of heaven shall be shaken.” -Luke 21

Whistling past the graveyard, that’s what our pulpits are teaching. Man-pleasers, hiding from evil, ashamed of the Gospel…lambs for the slaughter.

It’s all just lip service…empty words…“Full of sound and fury, signifying nothing.”

“Please Mr. Obama, may I have some freedom?” 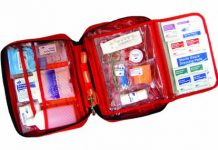 Pt 2 – Creating a First Aid Kit Suited to YOU…