Many political observers are baffled by the Obama administration’s decision to divert a half-billion dollars — outside the normal appropriations process — to the IRS to gear it up for its role in Obamacare.

The IRS will be responsible for making sure that you buy government-approved health insurance.  If you don’t satisfy the IRS, then they will be empowered to impose a fine on you for failing to comply — the infamous “mandate.”

Selecting the Internal Revenue Service as the vehicle for enforcing the mandate was a stroke of diabolical genius.  Most Americans would do whatever it takes to keep the IRS from noticing that they are there — very few would be willing to challenge the IRS directly.

Even rich and famous activists would hesitate when facing off against the IRS — and you can bet that business owners — whose future is in the hands of the IRS every April — aren’t going to risk it.  They will comply or cut staffing.

In some cases they will HAVE to cut staff in order pay for it all.

That is why Obamacare is now before the Supreme Court, which is widely expected to rule Obamacare unconstitutional in June.

The healthcare law also includes a whole pantheon of new taxes and fees, some of which are already in effect, including fees on drug companies and insurance policies . . . and all of it will be under the IRS enforcement mandate.

The Affordable Care Act was passed by a 100% Democrat – 0% Republican vote at a time when Obama enjoyed supermajorities in both Houses of Congress.  The Republicans oppose it on the grounds that the Constitution forbids the government from imposing a penalty on being alive, which is what the health care mandate actually does.

{pub}To read this entire article you need to become a PZ Insider.

Please choose one of our subscrition plans below…

All living Americans must purchase  a product – health care – as a condition of being alive, or pay a fine.  So the Republicans have tried to kill it by cutting off funding until after the Supreme Court rules in June.

“While President Obama and his Senate allies continue to spend more tax dollars implementing an unpopular and unworkable law that may very well be struck down as unconstitutional in a matter of months, I’ll continue to stand with the American people who want to repeal this law and replace it with something that will actually address the cost of healthcare,” said Rep. Denny Rehberg, R-Mont., chairman of the House Appropriations subcommittee for healthcare.”

“The law gives the Department of Health and Human Services (HHS) a $1 billion implementation fund to use at its discretion. Republicans have called it a “slush fund.” About half will go to the IRS; almost $200 million has been transferred to the tax agency in the past two years, with more than $300 million expected this year, according to figures provided to The Hill by a congressional aide.”

Polls show the Affordable Care Act is widely unpopular with a majority of Americans.  A new report was released today by Charles Blahous, a conservative policy analyst whom Obama approved in 2010 as the GOP trustee for Medicare and Social Security.

His analysis challenges the conventional wisdom that the health-care law will reduce deficits by raising taxes and cutting payments to Medicare providers.  Instead, his analysis finds Obamacare will ADD an additional $340 billion to the deficit.

“Does the health-care act worsen the deficit? The answer, I think, is clearly that it does,” Blahous, a senior research fellow at George Mason University’s Mercatus Center, said in an interview.

“If one asserts that this law extends the solvency of Medicare, then one is affirming that this law adds to the deficit. Because the expansion of the Medicare trust fund and the creation of the new subsidies together create more spending than existed under prior law.”

I’m no math whiz, but my calculator says 340 billion seconds — one second for each dollar of additional borrowing — is equal to ten thousand, eight hundred and eighty YEARS!

None of this is particularly new ground — we’ve discussed it before.  But we’ve not really ever put it into a context.  We know that the law was rammed down America’s throat. We know that less than half of voters approve of it.

We know that the GOP intends to repeal it as soon as they have the votes and we know that it will be a strong campaign issue against Obama’s re-election.

For Obama to bypass the Congress and spend $500 million to implement a law that may not survive ’til summer would therefore seem a major campaign gift to the Republicans.

Obama seems to sense he is in trouble; there is almost a sense of desperation in his rhetoric.  Obamacare is a political millstone around his neck, yet he clings to it like a security blanket.

Back in July, 2008 when Senator Obama was still seeking the Democrat nomination for the White House, Obama gave a speech in which he made this chilling proposal.

Obama proposed to raise a standing civilian “army” with a budget as large as that of the Department of Defense, saying;

Now, remember what the deeply deplorable Nancy Pelosi said on the eve of the one-sided vote to pass Obamacare?

“But we have to pass the bill so that you can find out what it is.”

The bill passed.  But most Americans still don’t know what is in it.  Something about mandates, pre-existing conditions, freebies for twenty-somethings. .  . and that the Republicans hate it.  But for the most part, that’s about it.

You read the Omegaletter — you are better informed than most people.  How many provisions of Obamacare do you know of?  Specifically?  I’ll bet you can’t list five specifics in the bill.  (I’m pretty well informed and I couldn’t without using a cheat sheet.)

So let’s use a cheat sheet and name five things in the Obamacare health bill.

So, the bill gives Obama control over student loans, who works in the public health sector, dumbs down health care clinics, creates a National Health Service (like the UK’s NHS??) and Section 5210 explains why Obama is doubling down on Obamacare.  (see page 1312 of the Act)

(1) IN GENERAL.–here shall be in the Service a commissioned Regular Corps and a Ready Reserve Corps for service in time of national emergency.

(4) ACTIVE DUTY.–Commissioned officers of the Ready Reserve Corps shall at all times be subject to call to active duty by the Surgeon General, including active duty for the purpose of training.

Now we skip down a few paragraphs to Section “C” which describes the proposed purpose and use of this “ready reserve.”  Note the inclusion of undefined “emergency response missions” to the mandate.

(A) participate in routine training to meet the general and specific needs of the Commissioned Corps;

(B) be available and ready for involuntary calls to active duty during national emergencies and public health crises, similar to the uniformed service reserve personnel;

(C) be available for backfilling critical positions left vacant during deployment of active duty Commissioned Corps members, as well as for deployment to respond to public health emergencies, both foreign and domestic; and

(D) be available for service assignment in isolated, hardship, and medically underserved communities (as defined in section 399SS) to improve access to health services.

(d) FUNDING.—For the purpose of carrying out the duties and responsibilities of the Commissioned Corps under this section, there are authorized to be appropriated such sums as may be necessary to the Office of the Surgeon General for each of fiscal years 2010 through 2014. Funds appropriated under this subsection shall be used for recruitment and training of Commissioned Corps Officers.

And so, there it is!  Buried deep inside the “Patient Protection and Affordable Care Act” are provisions that give the government dictatorial powers, turn the IRS into a kind of Gestapo and creates a private army under the direction of the Surgeon General, (a Cabinet officer who reports directly to the president.)

Although it seems abundantly clear that Obama wants to keep his job for another four years at almost any cost, the “almost” in that equation is his private, standing army.  It means so much to him — and to his agenda — that he will even risk losing re-election rather than give in.

UNLESS — and this seems a more real possibility with each passing day — he has a plan to implement some of the extraordinary powers he’s managed to appropriate to create a scenario that would justify postponing national elections for a time.

That might explain why he is moving forward with creating and equipping his IRS Gestapo force without even knowing whether the bill will survive the Supreme Court.

Obamacare isn’t an historical repeat, but it does seem to rhyme with one.

The Occupant’s Invasion is a Threat To You 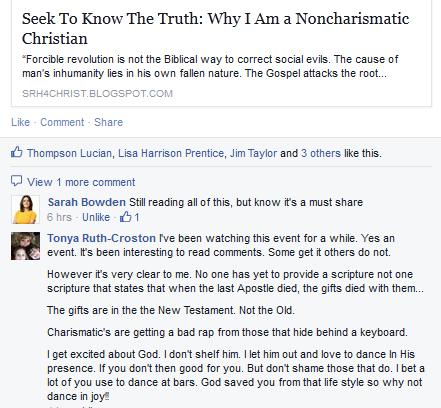 Answering For My Stance Regarding The Charismatic Movement