I find it a little disconcerting that I have to go to news sources outside this country (most notably the U.K.) to get a more accurate picture of world events.  Perhaps it is because the rise of fundamentalist Islam has taken a greater toll upon their country.  But we would do well to take note of these effects, and therefore be better informed and prepared.

In fact, Before It’s News reports that in the Middle East, a very dangerous thing for the West is happening, and it is happening rapidly.  A Muslim Caliphate is growing literally by the day. What is a Caliphate? A Caliphate is taken from the Arabic word Khilafa which means ‘succession’.  A Caliphate is an Islamic state led by a man with dual power.  That leader is both the supreme religious leader and a primary political leader, also known as a Caliph, or successor to Mohammed. The Caliph closely follows and strictly adheres to Sharia law over the land.

Now, there will be those who will say that a Caliphate is a historical term, and has no significance in the modern world.  But anyone paying attention cannot deny the escalation of Sharia law, nor ignore the warnings of those who wish to see it instituted here and around the world.

So, just to give you an idea of how important an issue this is, consider this information printed in the U.K.’s Daily Mail:

• Syria:  Moderate Sunni rebels and al-Quada linked jihadists are attempting to overthrow the Shia regime in a 3-year civil war that has left 150,000 dead.

• Iraq:  Sunni militants (ISIL) capture huge sections of the country on their march to Baghdad in an insurgency aimed at toppling the Shia-led government and creating an Islamic state across the Iraq-Syria border.

•  Saudi Arabia:  Hard-line Sunni regime has supported rebels in Syria, while Baghdad accuses the Saudis of financing the Sunni Islamic militants in Iraq.

• China (June 24):  The government releases videos showing how Islamic militants are using the internet to incite terrorist activities in the country after a string of attacks.

• Kenya (June 24):  At least 5 people have died in an attack on Kenya’s coast just days after Al Shabbab kills 60 people in twin massacres in revenge for Kenya’s military role in Somalia.

• Malaysia (June 24):  The highest court in the land upholds a ban on Catholics using the word Allah  to refer to the Muslim god, in what some experts fear is a growing Islamization of the country.

• Central African Republic:  Human rights groups warn that revenge attacks between Christian and Islamic militia risk creating conditions of a genocide similar to that in Bosnia in the 1990s.

• Nigeria (June 25):  At least 21 killed and 17 injured in an explosion at a shopping center in Abuja.  The attack was blamed on Islamic militants, and followed Boko Haram’s abduction of 90 villagers yesterday and the kidnapping of 300 Christian schoolgirls last month.

• Libya (June 25):  Libyans head to the polls for parliamentary elections as violence from a patchwork of militias, including Islamic extremists, grips the country since the ouster of Muammar Ghaddafi.

• Sudan (June 24):  Sudanese mother freed from death sentence for marrying a Christian is charged with fraud as she tries to leave the country for not using her Muslim name on travel documents.

These facts alone should alert you to the very real crisis that the world is facing.  And lest you think that these are just civil wars and infighting that will remain within the boundaries of the Middle East, please reconsider.  Again, The Daily Mail reports that Islamist militants fighting in Iraq and Syria are producing a weekly English language magazine designed to recruit and radicalize would-be jihadists in the West.  The magazine, which is professionally designed and edited, is published by AlHayat Media Center – the propaganda wing of ISIS, the Sunni militant group whose brutal campaign to establish an Islamic state in the Middle East has been branded too extreme even by Al Qaeda.

And they know what they are doing.  Titled, ‘The Islamic State Report’, the weekly magazine is published every seven days.  Now on it’s fourth edition, the first was printed on June 1st. A fifth edition is expected to be released on Saturday.

As with any propaganda tool, the magazine presents arguments in favor of ISIS and their objective.  It opens with several pages describing the history of the Middle East, and attempts to justify the establishing of a caliphate as a mission to correct the carving up of the region by Allied forces in the aftermath of the First World War.  Combine this message with heavy social media presence, and one can see how this could be effectively used against the West .

The publication of the magazine is just the latest in ISIS’s massive propaganda campaign, which includes dozens of accounts such as Twitter, Facebook and Ask.Fm.  Would-be jihadists in the West are encouraged to make contact through private smartphone messenger services, and ISIS has even developed its own android app.  They have also released slick English language recruitment videos, and even sell ISIS-themed clothing and memorabilia, such as T-shirts, ball caps and cuddly toys.  And the propaganda is working.

Britain’s Home Secretary reports that it is believed that about 400 young men have left the UK to join ISIS in the Middle East.  Secretary Theresa May warned these jihadists are now ‘just a few hours flying time’ from striking Britain, adding that they will ‘want to attack us’ when they return.  She said the terror threat was now ‘on the doorstep of Europe’ and was the most serious since 9/11.

And are we naive enough to think that our homeland has not been targeted by this slick and persuasive campaign?  Just a few short years ago, the mention of a new Caliphate was ridiculed and labeled paranoid.  Now it is boldly publicized in a professional and inviting magazine, and brazenly touted across all lines of social media.  September 11, 2001 surprised us all, and it devastated this nation.  Now, there are those who wish to do more than “harm” us; their goal is submission or total destruction.  And they are broadcasting their intentions.  What more proof do we need? When will the West (and specifically, this country) wake up?

1 Peter 5:8    “Be sober, be vigilant; because your adversary, the devil, as a roaring lion, walks about; seeking whom he may devour.” 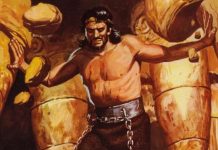 Samson A Picture of What America Looks Like Today

The Pulpits Are Silent