CBS News Senior National Security Analyst Juan Zarate says the White House, counterterrorism experts and politicians do not know whether the Islamic State of Syria and the Levant, (ISSL, formerly Islamic State of Iraq and Syria, and Islamic State) “is really a group just devoted to the regional goals of establishing an Islamic caliphate, or if at the same time they are developing global-not just ambitions but capabilities-to attack the West.” In the sterile talking head analysis of the al-Qaeda born Islamic army, both politicians and news reporters alike are sidestepping history, deeds, and declarations of ISSL as well as its stated purpose. These commentators and so-called leaders can’t see the forrest for the trees.

First and foremost, irrespective of what ISSL is, is what it is doing. It is moving across Syria and Iraq killing everyone in its path that doesn’t agree with it. First news reports spoke of the terror this organization was creating by beheading its adversaries and sticking their heads on posts along the roads. Another wave of news reports documented that Christians were to convert to Islam, pay the jizya tax, or die. The result has been mostly death as ISSL identifies Christians and kills them anyway. Evidence is the dozens of pictures of children with their heads sawed off, families slaughtered and laying on top of one another, and the bloody selfies these barbarians take of their deeds and post online.

The driving force behind ISSL is Abu Duaa. Abu Duaa was released in 2009 when the occupant of the Oval Office shut down the Bucca prison camp in Iraq. He sees both Syria and Iraq as an Islamic state, the beginning of a single al Qaeda caliphate. If it is rooted in al Qaeda, it is also rooted in the Muslim Brotherhood, the “president’s” foreign policy partner. The goal of the Muslim Brotherhood is to facilitate the building of a worldwide caliphate to usher in the Islamic Mahdi for his seven year reign on earth with his prophet Jesus. The eschatology is all written in the Koran and other prophetic writings of Islam, and Muslims have been awaiting the reformation of the caliphate as a sign of the end times.

This ISSL group’s goal is to establish a worldwide caliphate where Christians and Jews are slaughtered with impunity.  Revelation 20:4 says, “And I saw the souls of them that were beheaded for the witness of Jesus, and for the word of God, and which had not worshipped the beast, neither his image, neither had received his mark upon their foreheads or in their hands; and they lived and reigned with Christ a thousand years.” I have seen pictures of little children and their parents beheaded by ISSL. Members of ISSL tell the media they intend to hoist their flag over the White House. Where is the outrage? Is the veil that blinds reporters and politicians so thick that not a ray of truth may enter?

“Hunger Games”: The Orwellian Theme Behind the Movie 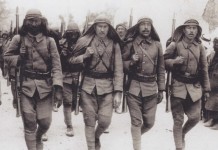 Saudi Arabia And China Team Up To Build A Gigantic New…