Yep, it is true, I like the .22 rim fire bullet as a survival weapon.

Now, I know that I will take a lot of flak but, the .22 rim fire AKA 22 is a great ALL PURPOSE round in many situations.

Yea, yea the first words that are coming to your mind are “stopping power” if I ever need to defend myself.

Hey, that is a great point and one that I agree with, but what I am talking about is ALL AROUND SURVIVAL not an all-out war.

Think about this for a moment and chuck all the “Mad Max” Hollywood junk.

Most of the things that I am going to shoot are rabbits, birds, snakes (rattlers and we have a lot) feral dogs & cats, coyotes, chickens, turkeys, and other small livestock.

Now you and I both know that these critters listed above will be more likely be put within my crosshairs than the two-legged ones, that is a fact.

That is the reality of the situation.

Another fact that I want to point out that you probably already know is that the .22 is a cheap to fire round. They are so cheap, you can literally buy thousands and thousands of rounds.

What does this mean for you?

It means that you are going to go out and shoot this weapon more often, thus get more proficient and not stress out about shooting a couple hundred rounds in one afternoon.

Fact, I am so proficient that I can literally shoot flies off the wall with my .22 because I have fired it so many times. Now the wife would be upset with me putting holes in the walls, so I am not going to attempt it.

So what does having this ability mean?

It means that if I had to put a bullet right in the “T” zone of some dirtbag’s face, I could do it without thinking or flinching and I would get the job done with purpose.

WHY? Because I have fired my .22 so much and have also put myself in a lot of situations to perform under pressure.

Here is another thing to think about. Have you been shot with a .22?

I have and it hurts like H – E – Double Tooth Picks. It did damage and I had to go to the doctor to get the bullet taken out of my right knee. (Note – I did this when I was about 10 yrs old and I still have the powder burns to show for it.)

What I want to point out is that in a TYPICAL situation, you fill someone with 5-10 rounds of .22, they are not going to get back up any time soon.

AND… if you are like me where all I really need is one shot, then you are dropping the dirtbag right then and there.  End of story… buh-bye

So to start things out…

My .22 Handguns of Choice 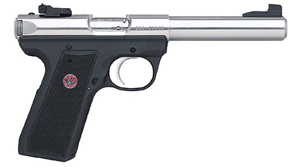 Ruger Mark III Target– all stainless steel so it will not easily rust. A 5.5 inch bull barrel which improves accuracy. You can shoot a fly off the wall at fifty feet easily. I like the fact that this also comes with a weaver rail so you can mount a “aim point / red dot” sight or better yet, a laser site for totally point and shoot accuracy.

This is a great “ranch gun” specially with all the rattlers we have out here in Texas. You know rattlers are “good eating” to; they taste a lot like tangy chicken.

Walther P22 – This is a great carry and conceal weapon. Double action, which means you can pull the trigger and the hammer comes back and fires. Holds ten rounds with one in the chamber makes 11.

Again, the larger caliber has greater “stopping power.” But you know what, eleven rounds at center mass will definitely not make a person’s day. This is a great weapon to get your wife, I should know, because they come in pink too.

Now the reasons I like the 22 is that they are pretty inexpensive. The Ruger and the Walther both run around $300.00. So this is affordable and able to easily save for this amount. I advise that if you are going to purchase, check out a gun show, you will be able to shop around and possibly get one of these at a great price.

Now the Ruger Target is a bit heavier, but I know that my wife has no problem shooting the bull barrel Ruger, but she does like her Walther P22 better. It fits her smaller hand a lot better and more comfortable for her to shoot.

Another feature I want to point out with the Walther is that many of the barrels are already threaded and ready to mount a suppressor. You can also get the Ruger with a threaded end and equip a suppressor on that as well.

Other Great Points About the 22

It is a pretty quiet round to shoot compared to a 45 or .357 which sounds like a cannon firing.

The 22 also does not have that heavy recoil that many females and kids tend to be concerned about.

If you have any sizable property, you can shoot it also and maintain safety. There are many targets with built in back stops that will handle a 22. So, practicing is easy, just gotta find the time to do it.

Now for all you James Bond wanna-be’s, what you may or may not know is that many professional assassins use the 22.

In fact, get on the web and go to You Tube. Once there, type in “Ruger Amphibian.” That is a modified Mark II or III with a fully enclosed suppressor / silencer.

Average price for this little beauty, about $1200.00 plus. The interesting thing is that in many states, it is actually legal to own one, but you do have to jump through some legal hoops to do it.

Funny story, my friend who is a 20 year Special Forces and now works for a “private company” saw my Ruger and the first thing he tried to do is unscrew the front end to expose the internal section of the suppressor / silencer. I told him it was as standard MkIII bull barrel. He smiled at me and said that a lot of his buddies “at work” carried the Amphibian as a back-up. It looked exactly like my MkIII.

You want to see a Ruger Mark IV Tactical in action? — https://youtu.be/eHgTC1ZPyc8

Finally, another point about a 22 is that if it gets lost or stolen, it isn’t going to set you back several pay checks to replace it. Again, we are talking a little over $300.00 to get a new in the box replacement. Sight it in really quickly and you’re are back in action.

So looking for an all-around survival weapon, I like the 22. There are a lot companies and models to choose from. Me I am partial to Ruger, made in the good ol’ US of A. Can’t go wrong with that.

My 22 Rifle of Choice

If you are looking for a rifle, then it is hands down, the Ruger 10-22 semi auto rifle. It has got to be one of the best buys for your money.

The great thing about the Ruger 10-22 is that there are many third party companies that sell all sorts of add-ons, modifications, 20, 30, 50 and even 100 round magazines.

The 10-22 is a pretty cool weapon, which if you want to have fun modifying it, then this is the weapon for you.

What are you looking for in cost? Again, around $300.00 – $350.00. Very affordable. This is a great varmint weapon that you can use for plinking, hunting and even self-defense.

As will all the benefits that I mentioned above regarding the 22, the same goes for the Ruger 10-22. You got cheap ammo, so you get so proficient that you can shoot a fly at 100 yards, or bring home some rabbit dinner if times get lean. 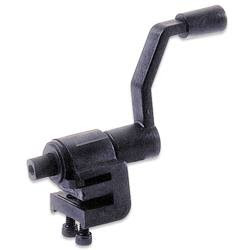 In fact, they sell what is called “Ruger 10/22 Full Auto Simulator” which you simply attach to your trigger guard, and crank for simulated FULL AUTOMATIC FIRE!!!!!!

The “Ruger 10/22 Full Auto Simulator” is easy to install and cranks out rapid fire. This little gem fits most semi-automatic .22 rifles. BUT it is NOT legal to own, carry or sell to residents living in California or other liberal states.

So, if you want one, move to Texas, then you can send all the lead down range you want. All you just have to worry about reloading your magazines. This little modification costs about $30.00 – $40.00. In fact, mount a Caldwell Lightweight Bipod to the front end of your Ruger 10-22 and with the “Ruger 10/22 Full Auto Simulator” you can do a lot of damage to that gang of rabbits down range that just keep gett’en in your cabbage patch. Folks, that is a lot of rabbit in the pot and a lot of lead down range.

This is why one of my weapons of choice in a survival situation is the 22. Everyone can shoot and become very proficient with it. Ammo is cheap so you don’t feel guilty about sending 200-300 rounds down range plus you can find ammo everywhere. The cost of getting a 22 is really reasonable and if you are a first-time gun owner, the 22 is a great place to start for all the reasons I gave above.

Shooting and hunting is a great sport and an American heritage.

In today’s political climate we need to be exercising more of our rights and passing on more of our heritage.

Because if we don’t, we will have neither.

I have a servant warrior Facebook group that I am revamping and bringing it back up to speed.

This would be a great place to start in taking a stand and where I will post my ideas and things that Tracye and I have been doing to push forward and live a better Servant Warrior lifestyle.

If what I am saying resonates with you, then you are quiet possibly hearing the Servant Warrior call.

If you do, then let me encourage you to check out our Servant Warrior Facebook group.

Let’s stand up and start answering the call.

Your Store Bought First Aid Kit AINT ENOUGH!! – Build One Suited For YOU & YOUR Needs

See The World Through The Eyes of The Wicked vs. The… 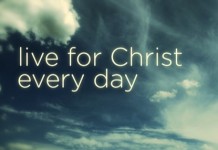