You know, it’s a funny thing.  It is all the horrific events and uncertain finances and wars and tragedies that sap our excitement and fill us with dread when all the while, they are the very reason we got excited in the first place.

I mean, it was seeing these things begin to come to pass that grabbed our attention in the first place.

And suddenly, all these things, as exciting as they were, begin to take second place to worry; the mortgage market, our retirement accounts, whether war in the Middle East will drive gasoline prices through the roof – and what IF the Democrats win the White House again next year?

Counting on the Second Coming of Christ sounds so . . . well, you have to admit it . . . to most people, it is a bit like counting on a lottery ticket to fund one’s retirement.  And I suspect that the ones to whom it doesn’t probably still support Harold Camping.

We all say we’re counting on Jesus, but are still funding our IRA’s just in case.  We trust in the Lord, but we’re also making sure we’ve got some food reserves and other emergency supplies.

We claim excitement at the return of the Lord as we see the signs of His coming, but we huddle in fear when it gets too close, just as unbelievers do.

We numb ourselves to the massive death tolls from catastrophic events by focusing in on the significance of the event from the perspective of Bible prophecy, compartmentalizing the horror of the actual event.

It is only later we are suddenly staggered by the realization of what it really meant to the victims of horrific earthquakes, catastrophic tsunamis, murderous tornado clusters, etc..

Are we faithless when we cower in fear when calamity comes too close?  Ghoulish when we rejoice from far away?

These are strange days; one hardly knows what to think, given all that we know.  Who doesn’t flee to shelter at the approach of a coming storm?

Trusting in the Lord doesn’t mean laying down on a freeway or standing in the path of a tornado.  Expecting His soon return doesn’t mean not preparing for one’s retirement.

Instead, our instructions are to behave as if the Lord was coming back tomorrow, but to plan as if He won’t come back in our lifetime.  Before He departed, He left us with two specific orders:

Preach the Word, and in the meanwhile, “occupy until I come”.

In a very real sense, the difference between a believer’s death and the Rapture is primarily one of process and timing.  Barring unforeseen calamity or early-onset disease, one can expect to die of disease or old age, usually in stages.

We don’t know when and we don’t know how, and most everybody has a different way of shuffling off this mortal coil, but we can all expect it.  For some, it will be a peaceful, natural process.

For others . . . well, we all have our own private horrors, ways that we pray won’t mark our transition.

Nothing is more certain, as they say, than death (and taxes).

At the moment of death, our souls stop receiving input via the five physical senses (carnal) and we begin receiving our input via our spirit.

The Rapture is an entirely different process, which is why the Scriptures call it “the blessed hope.”  Like death, the Rapture could happen at any time, but unlike death, the process is both certain and beautiful.

The Lord Himself descends from Heaven with a shout and then we who are living are suddenly “caught up” (Gk: parousia Latin: rapios) to meet Him in the air.  On the way up, our bodies are transformed and instead of awakening eternally alive, we never have to go through the dying process in the first place.

The certainty is this: if you aren’t Raptured, you will die.  There isn’t a third option.

Now to the central question; do you know when you will die?

There are those among our fellowship who are terminally ill – some who have even been given a time frame of how long they have left.

Even they have no more idea of the day and the hour of their deaths than they do of the day and hour of the Rapture.  My mother-in-law is approaching ninety, in fine physical health, still has all her marbles and reads five newspapers every day.

She knows her time could come any day, but she doesn’t try to divine the day or the hour.  She understands the futility of it.  She correctly believes she has about an equal chance of death or the Rapture.

Your behavior changes are sincere enough, but they are as genuine as the guy who never locks his doors suddenly locking them because of a rash of burglaries in his neighborhood.

The change isn’t brought about by a sincere change of heart, but rather out of fear.  If the burglars were caught, he’d go back to his old habits.

“And this know, that if the goodman of the house had known what hour the thief would come, he would have watched, and not have suffered his house to be broken through.” (Luke 12:39)

I know approximately when I will die, assuming I take care of myself and live into old age.  That knowledge inspires me to take better care of myself.  And the older I get, the more inspired I become.

I know the Rapture is near, and that inspires me to preach the Word, give the warning, tell my friends, but not to empty my bank account, sell my house or quit my job.

We are to occupy until He comes, planning our individual futures as if we could count on our full three score and ten, or even four score (or more) but to live out our lives the way we would if we knew He was coming tomorrow.

It is ok to be just as afraid of an approaching tornado as the unbeliever in the house next door. Or to be just as careful in traffic.  Or to stock up on emergency supplies, just in case.

(Being dead shouldn’t scare a believer, but I can think of few methods of getting that way that don’t scare the pants off me.)

“Trusting in the Lord” is not a synonym for being stupid.

Then and Now – The Nazi Similarities 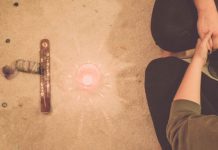